GUEST BLOGGER MAIA DYLAN WITH THEIR LINE OF DRIFT

Please welcome my guest blogger today, the wildly talented Maia Dylan with THEIR LINE OF DRIFT.


Thank you, for hosting me for my latest release, Their Line of Drift – Sniper Team Bravo 1. This book released on March 21 with Evernight Publishing.  If your readers would like to they can post questions to me on Twitter using the following hashtag #SniperTeamBravo and tag me using @Maiadylanauthor and I will answer them as I see them.

Can he earn a second chance, or will their love be left to drift away...

The line of drift is the pathway of least resistance between two points, the place where you are and the destination you long to be. A sniper will follow that path when looking for his target. When Devon Roberts left Redwood Falls eight years ago, he knew his line of drift would lead him back. He may have spent those years helping to rid the world of evil, but the only destination he longed for was Finn McGregor.

Finn knew all about evil. He lived with it every day. Devon returns hell bent on getting him back and discovers that Finn’s been fighting his own personal war at home. Can Devon keep Finn safe, and convince him that their love is worth a second chance? Or will they allow their forever love to drift away? 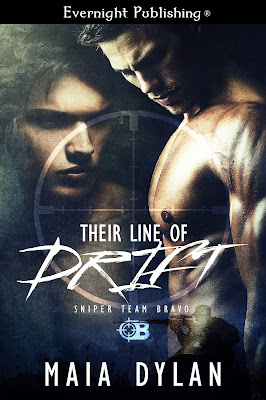 
Forgetting all of his training and everything he should have done next to ensure the safety of his team, Devon ran forward, dropping to his knees beside the prone figure. “Oh, shit, Finn.” There was no missing the fear in his voice. With hands that shook, he checked for a pulse and breathed a sigh of relief at the rhythmic thumps he felt against his fingers.
As gently as he could, Devon rolled Finn onto his back, and his breath caught at the sight of swelling and bruising around his left eye. “Jesus Christ, Finn, what the hell happened?” Devon ran his hands over his skull, searching for any contusions or swelling that could indicate a head injury or concussion. He breathed a sigh of relief when he found nothing.
Finn moaned, and his eyes fluttered open, and not for the first time, Devon found himself drowning in his beautiful green eyes and wondering why in the hell Finn was in the house. “Dev?” Finn asked in a weak voice. An ache settled in his chest. He had heard that voice in his dreams on so many nights, but hearing it now, weak with pain rather than passion, just about killed him.
“Yeah, Finn, it’s me,” Dev answered as he swept a lock of Finn’s dark hair from his forehead. “Where else does it hurt, baby? I want to get you up onto the bed so Sam can get a look, but I don’t want to hurt you.” A flash of hurt that Devon knew had nothing to do with his injuries flickered in Finn’s eyes before his anger apparently rose to mask it.
“It’s none of your concern where the pain is, and I sure as hell am not your baby,” Finn said, sneering the last word and Devon nodded. He understood Finn’s anger and accepted it to a point.
“LT, Sam’s headed out to your truck to grab his med kit,” Marcel said from the door. “You need any help getting Finn up onto the bed?”
Devon looked in earnest at Finn whose eyes narrowed, attempting to read his mood. “No, Marcel, I do not need any help getting Finn into bed. I can do that all on my own,” he said with a bit of humor.
Finn growled over the guys’ laughter in the background. “Get the hell away from me, Devon Roberts, I can make it to the bed myself.” Finn gritted his teeth and rolled to his side, a groan of pain caused any humor on Dev’s part to evaporate. Frowning, Devon swiftly swept Finn up and into his arms, wincing at his quick inhalation of breath.
Devon moved swiftly to the bed, waiting while Marcel removed the dust cloth, then laid Finn down on the quilt, absently noting that it was the same damn one he had used all those years ago. “Stop it!” Devon ordered as Finn started to struggle to stand. “Stay there, Finn, and let Sam have a look at you.” Sam put his med kit on the bed and opened it, but Finn kept trying to stand. Devon reached out a hand and gently gripped his chin, tilting Finn’s face up so that their gazes locked together.
“I mean it, Finn. Stop trying to move around, and let Sam have a look at you. Once we have you all squared away, you are going to tell me what the fuck happened.” A red hue rose up Finn’s face and his gaze slid away, but Devon gently turned his face so Finn had no choice but to look at him once more. “You are going to tell me who did this to you, Finn. I know what being beaten looks like, and you will tell me who turned their fists on you.”
“What do you care, Dev?” Finn’s expression turned bleak and he kept his voice low, obviously uncomfortable with the attention, and Devon’s heart ached even more. “You’ve had eight years to pick up the phone and see how I was doing. Now, last time I checked my cell phone, I hadn’t missed any calls so I figure you didn’t really give a shit. So why bother now?”
© MAIA DYLAN, EVERNIGHT PUBLISHING, 2016

Five questions for the author
Q: Every book is special to an author.  What is it about this book that makes it special for you?
A:  This is my first MM.  I have loved this genre from the first time I read Stormy Glenn, Sam Crescent and Cree Storm.  There is something about the powerful expressions and imagery you can create with the scenes are between two male characters, especially the hot scenes!

Q:  Sometimes things happen when you are writing a series that wasn’t expected at all.  Have you had this happen to you?
A:  Heaps!  I am not a planner.  I am a write-by-the-set-of-your-panties kinda girl.  There have been moments where I will finish up a scene and be like WTF?  I did not see that coming!  This whole series started with an image I found that I simply couldn’t let go of.

Q.  Why do you always include a danger element to your books?
A.  I write what I love to read.  I love books that take you on a journey, but where the characters face a challenge that adds an element of urgency to them and to the book.  As a reader, there is nothing I like more than getting that goose bump, hair rising on the back of my neck feeling as I join the characters within the book I am reading on the journey to solve their mystery.  I want to give that to my readers.

Q.  What are you working on at the moment?
A.  I have book eight of the Grey River series over half way, as well as book two in the Sniper Team Bravo series.  There is also a new Shifter Ménage series coming soon and a standalone MM as well.  Soooo many stories to tell, so little time!

Q.  Do you have anything to say to your current readers or to those that haven’t yet read you work?
A.  If you have read any of my books, thank you so very much!  It blows my mind that someone has actually read something that I wrote, but gosh I hope you enjoyed it!  Did you?  Please let me know, I find I suffer from a slight case of needy-nelly with my writing.  If you haven’t read my book, but you love erotic romance stories between strong men and an independent woman, where the path to their happily ever after can be a bumpy one, but there is always a happily ever after, and their love and laugher is real on every page, then you’ll find my books right up your alley!

Author bio:
Maia Dylan lives, loves and works in beautiful New Zealand.  She married her best friend and they have two adorable, but stubborn children who obviously take after their father.
Maia’s career has featured a lot of travel, and she has filled her time at airports and in the air with books, books and more books.  Her love of erotic paranormal romance has seen her amass a huge library.  She has been an avid reader and lover of ménage romances since she read her first book in this genre about three years ago.
Outside of writing, Maia loves to eat, so she loves to cook!  Her herb garden is legendary, but she still has issues getting tomatoes to grow.  She’s been a performer for years, and has even sung on international stages, she would love to own a classic Ford Mustang one day and of course have the opportunity to race it on a race track without fear of a speeding ticket.
Although ultimately her dream is to be able to write full time on a sandy beach with a Mai Tai at hand, she is quite happy to fit her writing in when she can.  As long as someone reads her books, gets a laugh and maybe come to love her characters and much as she does, then she feels that she is living her dreams no matter what!
Social Media Links
Amazon Authors Page US: http://amazon.com/author/maiadylan
Facebook- https://www.facebook.com/maiadylanauthor
Street Team FB Page - https://www.facebook.com/groups/955387561187276/
Goodreads - https://www.goodreads.com/author/show/13724210.Maia_Dylan
Twitter - https://www.twitter.com/Maiadylanauthor
Website – http://www.maiadylan.com
Blog - http://www.maiadylan.com/#!blog/c112v
Newsletter sign up link:  http://www.maiadylan.com/#!contact/c1kcz

Thanks so much for stopping by, Maia.  :)