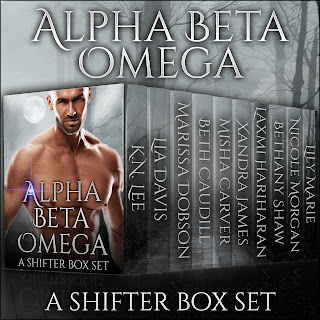 Only 99 cents
From today's hottest NY Times, USA Today, and Bestselling authors comes a collection of 10 novellas, featuring hot alpha, beta, and omega shifters. If you like tigers, bears, wolves, and more you'll love this box set. Each story is either a first in a series or a stand-alone novella. Check out the line up! A Tiger's Claim by Lia Davis
The Scarlett Legacy by K.N. Lee
Tiger Time by Marissa Dobson
Healer's Fate by Beth Caudill
Bearly Smitten (The Alpha's Bride Book 1) by Misha Carver
Reluctant Revenge - Under the Demon's Skin by Xandra James
Feral - A Many Lives Story by Laxmi Hariharan
The Beta's Mate by Bethany Shaw
Night Falls by Nicole Morgan
Wounds to Bear (Heart of The Bear Book One) by Lily Marie

Paul Holton is the leader of the Racinitine Pack. Rising to his position from bloodline and destiny hadn’t been easy for the strong willed young man. Having sacrificed many of the things his kind long for in their reticent existence, Paul knew all he forfeited had been for the greater good.
Kinzey Sloane had been finding ways to get herself into trouble ever since she was a rambunctious young child. Now a reporter for the small press, The Grand Lake Gazette, she was determined to make a name for herself no matter what it costs.
When Paul crosses paths with the tenacious and gorgeous red head, Kinzey he knows he’s in trouble. Not only can he see the fire in her, but he can feel it as well. But when Kinzey gets too close to his secrets, he is faced with making a choice that could not only change his world, but the only life his pack has ever known.


Thanks so much for stopping by, Nicole. :)
Posted by Elena Kincaid at 4:49 PM